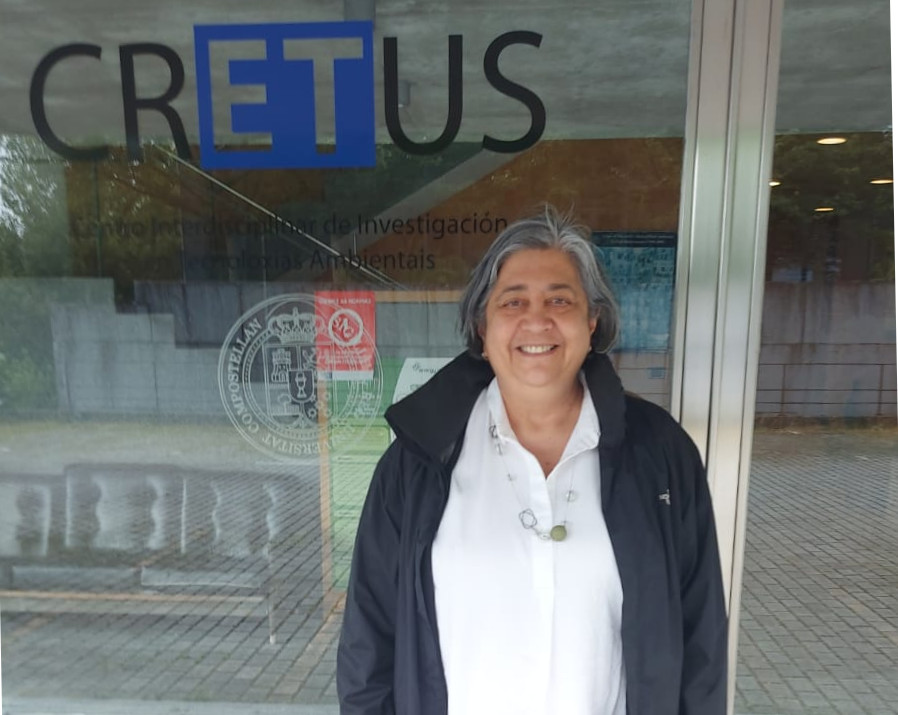 11 Jul Interview with Patricia Majluf, researcher at the NGO Oceana in Peru

EqualSea Lab is currently involved in several international research projects. One of them is Distant Water Fleets, an initiative promoted by the United States Agency for International Development (USAID) and led by Prof. Rashid Sumaila, from the University of British Columbia (Canada).

The objective of this project is to deepen the study of the illegal and unsustainable fishing activities carried out by the fleets of some countries in the waters of other nations, mainly in America, Africa and Asia. This research will be made through the analysis of boat ownership and interactions that occur with local artisanal fishing. Distant Water Fleets also has the participation of the Peruvian scientist Patricia Majluf, who works for NGO Oceana. At the end of June, Patricia visited the University of Santiago de Compostela to hold a work meeting with the EqualSea Lab team. And we took the opportunity to talk with her about her work.

Dr. Patricia Majluf Chiok is a Peruvian biologist who has decades of scientific and conservation activity dedicated to the protection of the oceans. She is currently a senior researcher at the International NGO Oceana. Since the early 1980s, Patricia has studied the populations of marine mammals and birds on the coast of Peru and the situation of the fisheries in this area, one of the most productive ecosystems in the world. She has also participated in the development and establishment of marine protected areas in the country and has promoted research on the anchovy, called in Spanish anchoveta (Engraulis ringens). Among other initiatives, Patricia launched a plan in Peru to promote human consumption of this fish whose catches, the vast majority, are destined for the production of fishmeal and fish oil for aquaculture.

Patricia’s work has earned her the recognition of various institutions. She has received the “Charlotte Wyman Award for Outstanding Women in Conservation”, the “Lindbergh Award”, the “Whitley Gold Award”, the “Guggenheim Fellowship”, the “Marlin Perkins Conservation Award”, the “Award for Distinguished Services of the Society for Conservation Biology”, the “BBVA Foundation Award for Biodiversity Conservation Actions in Latin America”, the “Pew Scholarship for Marine Conservation Programs” and the “Summum Sustainability Award”.

– How did the collaboration with the EqualSea Lab and this visit to Santiago come about?

– Everything arises with the invitation of Rashid Sumaila to participate in the Distant Water Fleets project of USAID (United States Agency for International Development). With this project we want to measure the impact of foreign fishing fleets on local economies and communities in a group of countries in America, Africa and Asia.

The America’s group, in which the cases of Brazil, Peru and Ecuador will be studied, is led by Prof. Sebastián Villasante, together with Natali Lazzari and Arne Kinds, from EqualSea Lab. And from this group came the idea of ​​collaborating on a series of papers. In addition,one day, talking to Sebastián, we commented on his work with the Equalsea project, funded by the European Union, and his research on equity. And it seemed to us that we could develop fruitful collaborations.

– What equity projects have you worked on?

– Coming from Peru,one of the issues that most interests me is the production of fishmeal and fish oil. These fisheries are not intended for human consumption, but are used to manufacture these products, used for animal feed, mainly in aquaculture.

Off the coast of Peru, these fisheries take up to 98% of the biomass of anchovy, a critical element in the food chain of the Humboldt Ecosystem, one of the most productive ecosystems in the world. The fishery deprives many species of fish, birds and marine mammals, etc. of food, making them much less resilient to the natural environmental variability of this ecosystem, which includes oceanographic phenomena such as El Niño and La Niña.

On the other hand, Peru is a country that continues to have significant malnutrition problems in its population, which in some areas exceeds 60%. We are talking about boys and girls who, growing up malnourished, their physical and mental development are severely affected and this supposes a limitation of opportunities forever, for their entire lives. This seems obscene to me: using all the catch to feed animals instead of finding a way to use this fish to feed people who don’t have to eat.

And that’s what I’m working on now. At Oceana we are looking for ways to ensure that fishing increases its contribution to nutritional security in the world. One of our objectives is to improve the use given to fish in the countries where we work, as is the case of anchoveta in Peru.

– This is an activity of enormous magnitude.

– It’s huge, huge. We are talking about catches of four to six million tons of anchovy every year, the world’s largest single-species fishery. The anchoveta is not only highly nutritious, but it is the conductive element that allows the use of the enormous productivity of the ecosystem through the food chain of the place.

These six million tons are really more, because in the process from the point of capture until it reaches the factories, between 10 and 20% of the weight is lost. Peru’s fishing is so large that the FAO publishes the statistics of global fishing catches with and without anchovy, because the enormous fluctuations of this fishery can hide the real trends of what is happening with the rest of the planet’s fisheries.

I have dedicated a good part of my life to researching the ecological and socioeconomic impacts of the anchoveta fishery in Peru. By understanding this, we will be able to identify better options to use the anchoveta in a way that not only contributes to the nutrition and well-being of Peruvians, but also maintains the health, structure and function of the ecosystem.

– You promoted a hopeful initiative in Peru to introduce anchovy in the population’s diet. Tell us more.

– For a long time, Peruvian gastronomy, thanks to chefs like Gastón Acurio, has become world famous. It is the fruit of the enormous cultural and biological diversity that characterizes Peru. As one of the main justifications for using all the anchovy to feed animals was that Peruvians did not eat it, in 2006 we started the “Anchoveta Week” campaign (inspired by the Sardine Week in Spain). The goal was to reintroduce anchovy to Peruvians, with the generous help of Gastón Acurio and the best chefs and restaurants in Peru.

We partnered with producers and chefs, and we developed a program of activities with the restaurants. We also contacted the presidency of the Government of Peru, we scheduled the “Anchoveta Week”, we did tastings so that people could try it. It was crazy: 18,000 people tried the fish and 95%, according to a survey we did, said that they liked it, that they would eat it again and that they would give it to their families. .

Given these results, interest grew and, a few months later,  a law was enacted promoting the consumption of anchovy for national food. Soon after that investments grew to place it on the market. In two years, cans of anchovy were in supermarkets, when before they were hardly seen. Later, unfortunately, conflicts with the industry reduced the presence of anchovy in the market. This situation is improving, but there is still a lot to do.