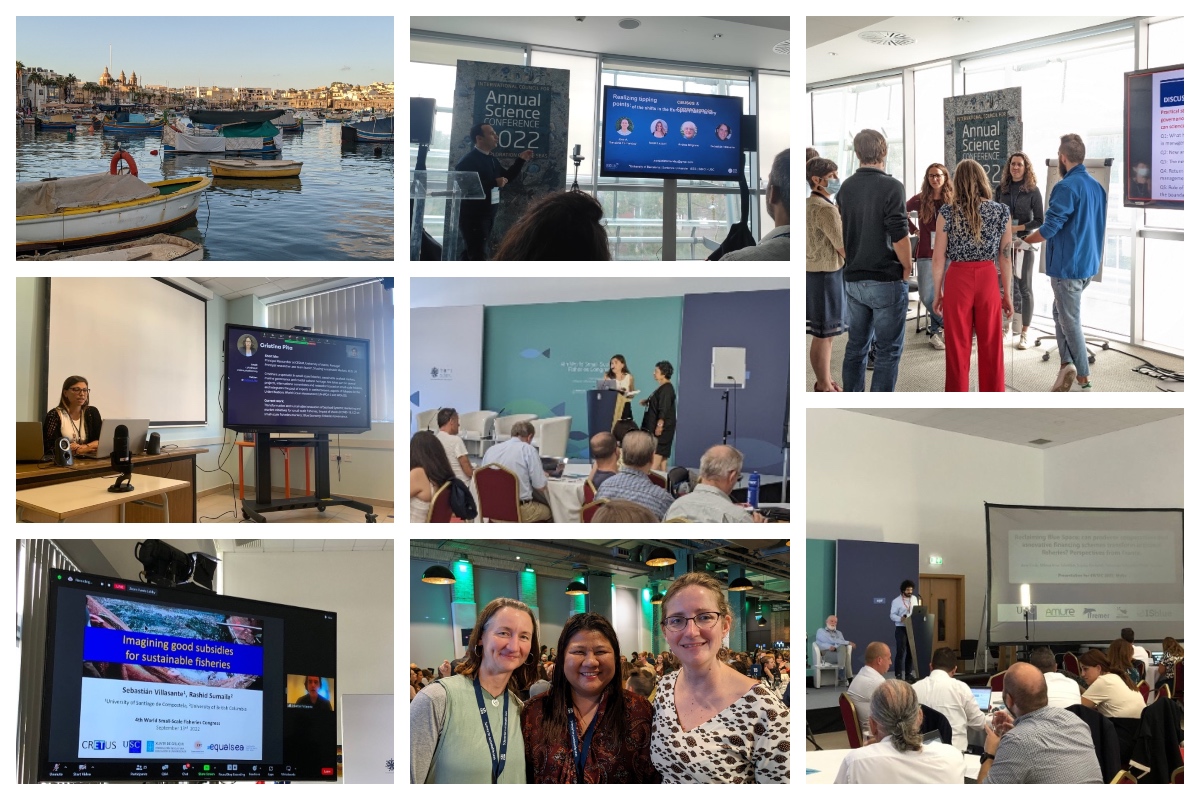 After the summer holidays, the academic year has started with two important meetings for our team.

The following week, from 19-22 September, Dublin was the venue for the ICES Annual Scientific Conference 2022, where our researchers also participated.

The World Small-Scale Fisheries Congress (WSFC) is the most important forum for Small-scale Fisheries research, and it takes place every four years. In its 4th edition in 2022 (4WSFC), the congress was divided into five regional meetings, in which Malta hosts the European event. It has taken on particular significance as it coincides with the UN’s “International Year for Artisanal Fisheries and Aquaculture” (IYAFA 2022).

As our team members said, “the conference was a great opportunity to meet old and new colleagues and discuss the challenges for small-scale fisheries in Europe”. Malta, with its vibrant fishery sector and long fishing tradition, provided the perfect spot for this. 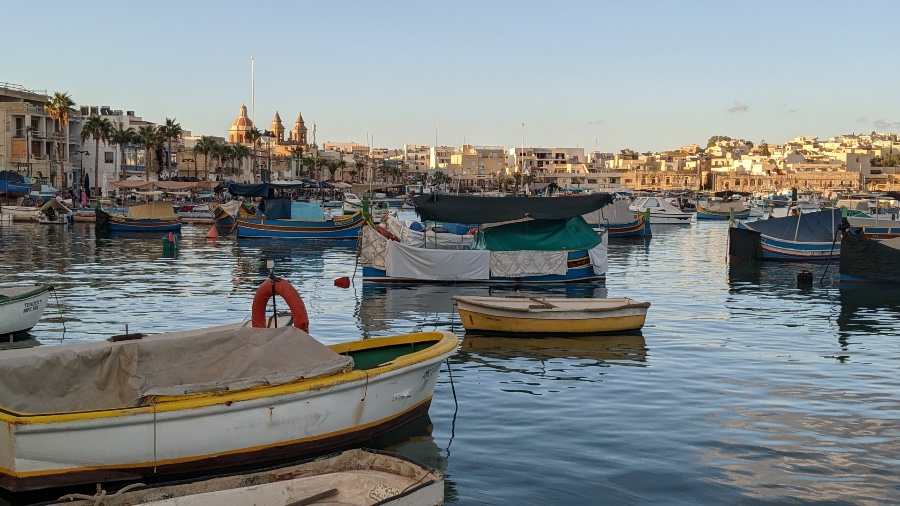 Some of the topics discussed there were Blue Justice, gender equity, fisheries subsidies, fishing with low environmental impact, good governance, and linking small-scale fisheries with the Sustainable Development Goals. many of these questions are linked to research from the EqualSea Lab.

Milena Arias-Schreiber, Sophia Kochalski, Arne Kinds and Katina Roumbedakis were present at Malta to attend the 4WSFC. Together with them, Sebastián Villasante (director of the EqualSea Lab) and Ignacio Gianelli gave their online presentations at the conference.

Milena was also one of the members of the Organizing Committee, and had many active roles during the congress, including chairing and moderating several sessions and speaking the opening words for the congress on the first day. She chaired and introduced the first plenary on “Imagine Blue Justice”, co-chaired the second plenary on “Imagine gender Equality” with Dr. Katia Frangoudes and participated as a panelist in the plenary sessions “Imagine Good Subsidies” and the last congress conclusions plenary titled “Imagine All Things possible for SSF in Europe”. In this last session, Sebastián Villasante also held a keynote with the title “Imagine good subsidies for sustainable fisheries“. 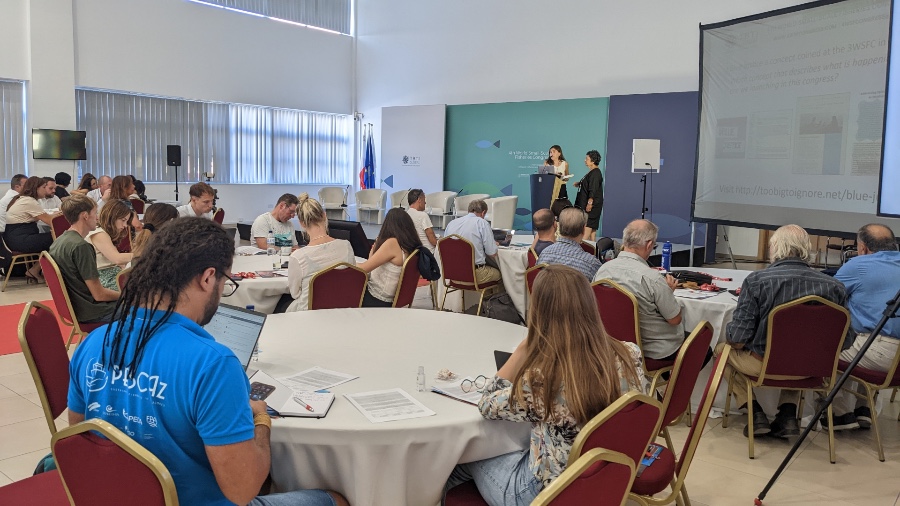 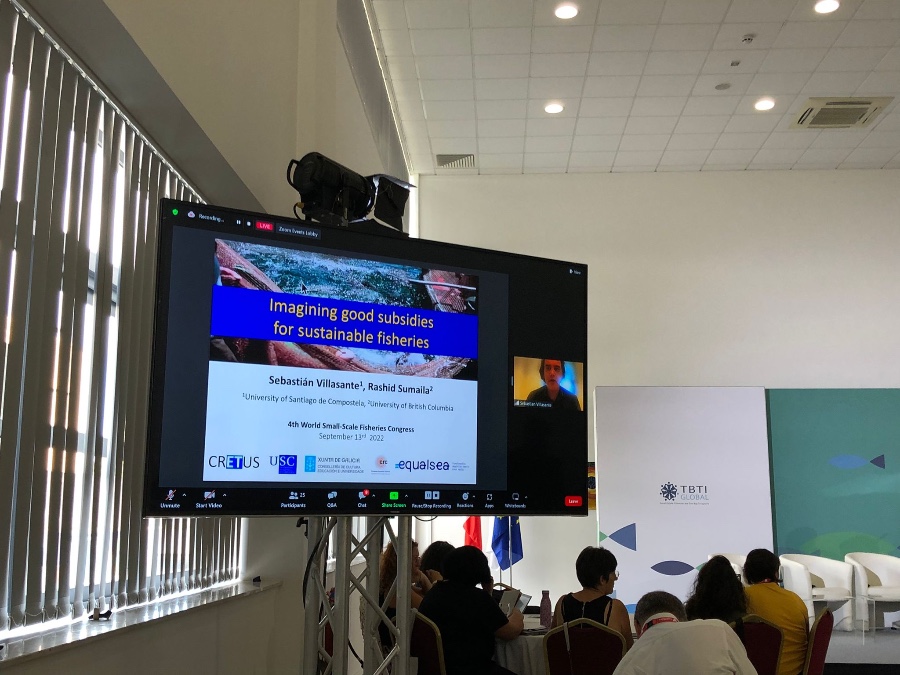 1- Katina Roumbedakis, Ignacio Gianelli and Sebastián Villasante co-chaired the session Imagine Rising TIDES – Transformative Initiatives Driving Equity in our Seas. The session promoted the dialogue on how TIDES can strengthen partnership, co-create knowledge and engagement in coastal communities now and in the future. Through an exchange of experiences of a variety of initiatives implemented in different countries, we identified positive examples, lessons learned, impacts, innovations, and the potential for reproducibility of successful initiatives. 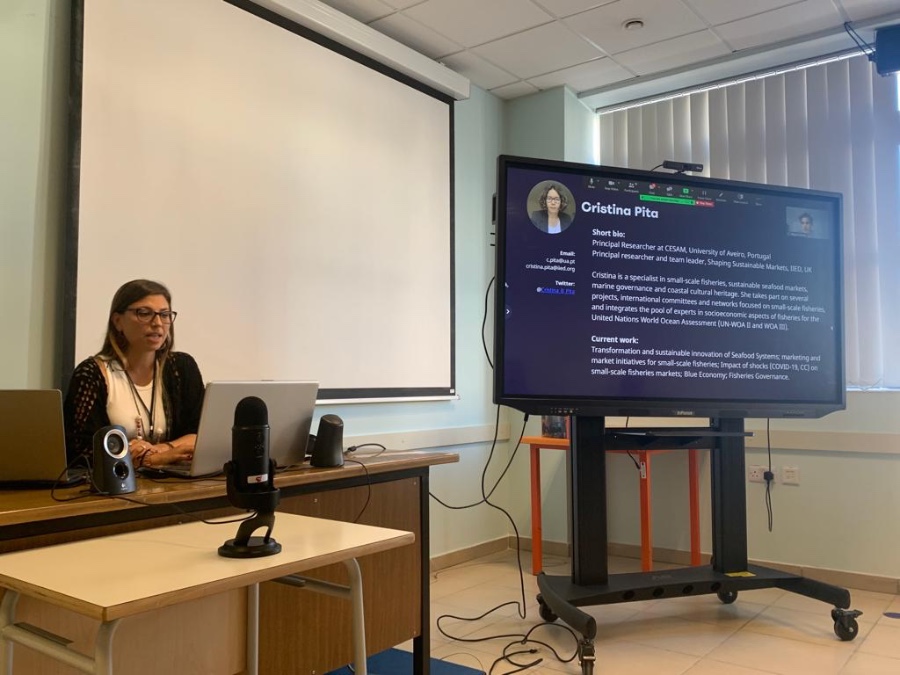 2- Milena Arias, Arne Kinds and Sophia Kochalski organised the session Recruitment of small-scale fishers in Europe: what can we learn from science and experience?. They explained how the failure to attract new generations of fishers to the sector is one of the key threats to the continued existence of small-scale fisheries in many European regions. The first part of the session collected experiences from different parts of Europe (Finland, Spain and Belgium) and combined academic and non-academic perspectives. The second part of the session was interactive, and all session attendees had the possibility to contribute their experience and knowledge while we were all reflecting together on some key questions. 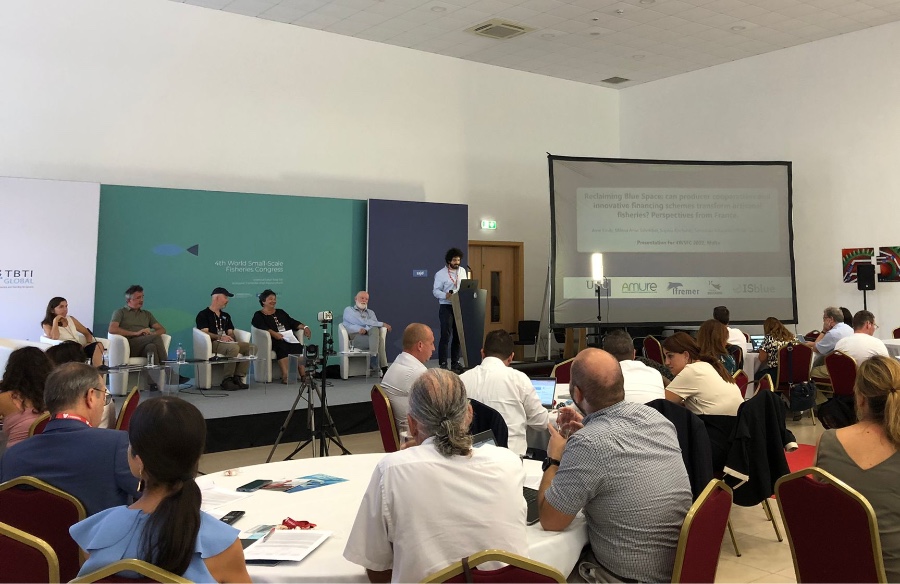 After the 4WSFC, part of the EqualSea Lab’s team was also involved in the International Council for the Exploration of the Sea (ICES) Annual Science Conference, held in Aviva Stadium (Dublin) from 19-22 September. It was a hybrid meeting involving 400-500 participants in total.

This is an annual key event for all fishery scientists working in the North Atlantic. EqualSea Lab has a long engagement with ICES, including chairing of the Working Group on Marine Ecosystem Services.

Among them were Sophia Kochalski and Natali Lazzari from our laboratory. Milena Arias-Schreiber, Gill Ainsworth and Ignacio Gianelli also participated online.

Ignacio Gianelli was presenting a poster at the session Ocean futures: engaging science and society in visions of the future. In his poster, Envisioning small-scale fisheries futures: engaging with sustainability initiatives in the Global South, Ignacio showcases the transdisciplinary project that EqualSea Lab, in collaboration with the SARAS Institute (Uruguay), is carrying out to foster transformative pathways for small-scale fisheries in Uruguay.

Natali Lazzari participated in the ICES meeting, co-authoring with Jose A Sanabria-Fernandez (in the picture), Andrea Belgrano, and Sebastián Villasante a study entitled Realizing tipping points: causes and consequences of the shifts in the European and Argentinean hake fisheries. In this talk, the authors studied tipping points of the two most important hake fisheries in the world, highlighting the importance of considering pressures other than environmental ones when analyzing and understanding regime shifts in fisheries. 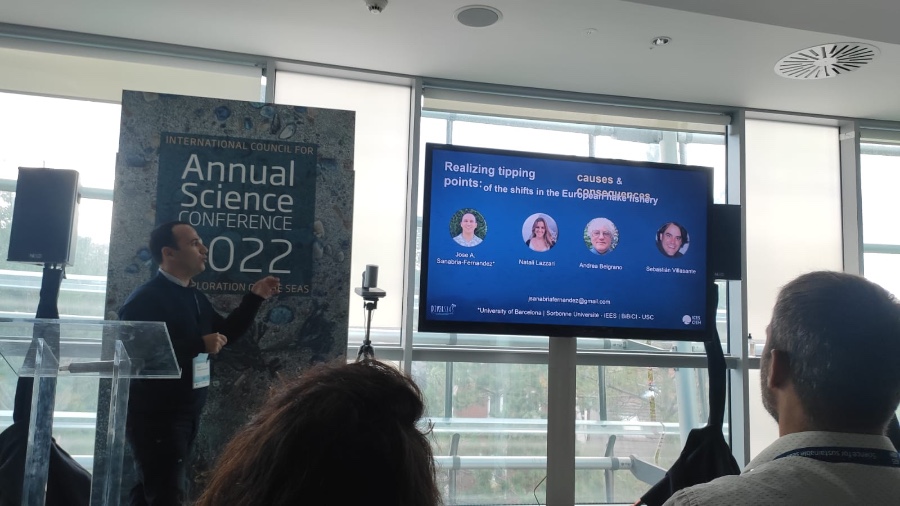 Sophia Kochalski organized a session called The role of small-scale fisheries and communities in ocean governance, bringing a sometimes overlooked perspective to the ICES community. In the highly interactive session, participants discussed practical steps towards social justice and ocean equity in ocean governance. 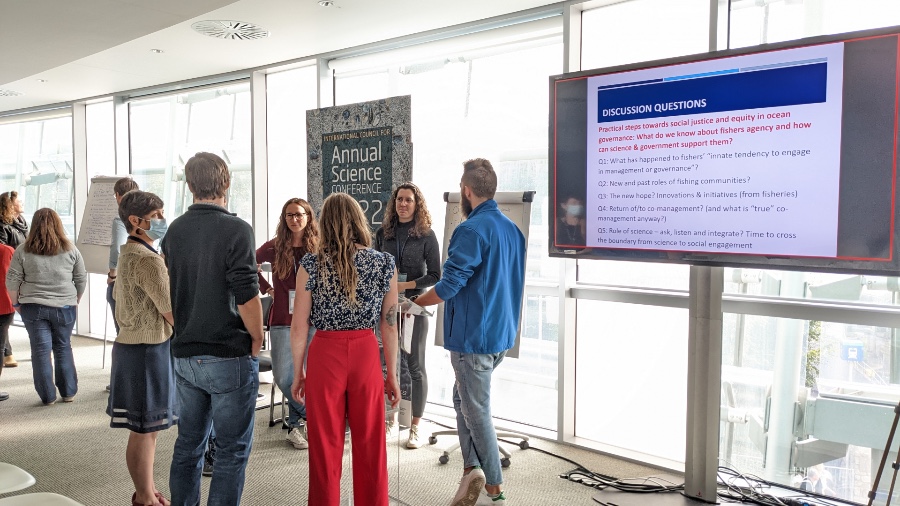 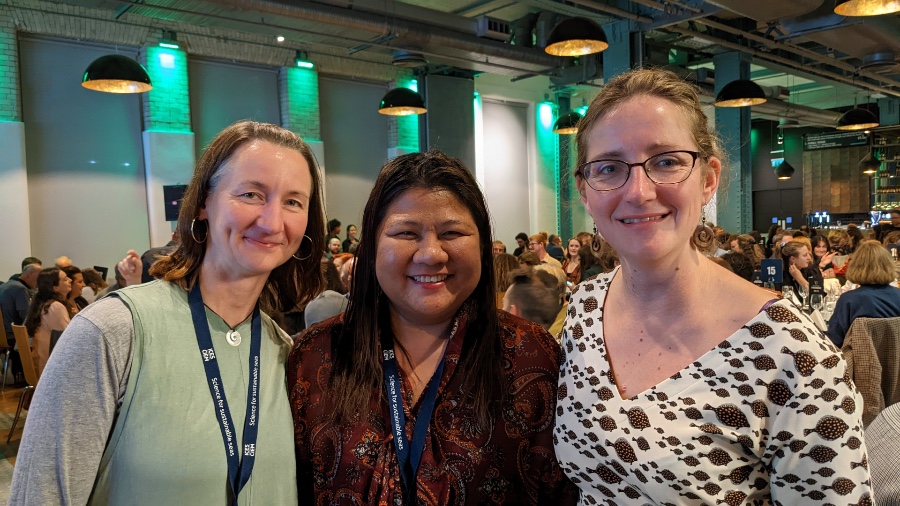 In the picture above, Sophia (right) is with Dr. Annette Breckwoldt (left; from ZMT in Germany, who co-organized the governance Session with Sophia) and Jimlea Nadezhda Mendoza, a PhD student from the Ca’ Foscari University of Venice, Italy, who presented her work on fishers’ perspectives in Laguna Lake, Philippines, at the conference and will be visiting the EqualSea group soon.

The session counted with the online participation and presentation from other EqualSea Lab’s members:

Sophia also presented results from postdoctoral project “SocialShift” in another session. The title of the presentation was What’s your story? Capturing fishers’ experiential knowledge through biographical interviews, leading to many interesting exchanges and new contacts and ideas.